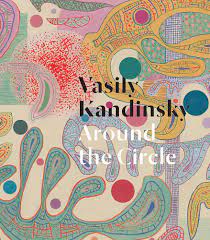 Vasily Kandinsky: Around the Circle

Vasily Kandinsky is recognized as a major artistic innovator and painting theorist. In the opening decades of the twentieth century, he was among those who advanced nonrepresentational modes of artmaking to lasting effect. The artist’s stylistic evolution in this regard was intimately tied to his sense of place and the communities with which he engaged. Kandinsky gained insight from meaningful intersections with artists, musicians, poets, and other cultural producers, especially those who shared his transnational vision and experimental bent. Uprooted time and again, he adapted with his every relocation across Germany, back to Russia, and eventually to France—all against the backdrop of the socio-political upheavals occurring around him.
In this exhibition, Kandinsky’s work unfolds in reverse chronological order, starting with his late-life paintings and proceeding upward along the Guggenheim’s spiral ramp. His was not a fixed path from representation to abstraction, but rather a circular passage traversing persistent themes centred around the pursuit of one dominant ideal: the impulse for spiritual expression. This, what Kandinsky called the artist’s “inner necessity,” remained the guiding principle through the periodic redefinitions of his life and work.
The presentation begins with Kandinsky’s final chapter set in France. The natural sciences and the Surrealist movement, as well as an abiding interest in Russian and Siberian cultural practices and folklore, informed his organic imagery and prompted recurrent themes of renewal and metamorphosis. Paintings from his decade of teaching at the Bauhaus, a progressive German school, manifest Kandinsky’s conviction that art could transform self and society and exemplify the revitalization of his “non-concrete” style following direct contact with the avant-garde in Russia. The final section of the show examines Kandinsky’s earliest paintings, made while he was living around Munich. There he participated in heightened vanguard activity across multiple disciplines, fluidly moving between painting, poetry, and stage composition, for example. In time the artist interrogated the expressive possibilities of colour, line, and form.
At every turn Kandinsky responded to his environment and developed new ways to probe the spiritual in art. These paintings, watercolours, and woodcuts drawn from the museum’s extensive Kandinsky collection illuminate the journey of an artist who would not leave behind the precedents of representation or of his own work altogether, even as he explored the transcendent potential of abstract forms.
Vasily Kandinsky: Around the Circle is organized by Megan Fontanella, Curator, Modern Art and Provenance.
Presented concurrently with Vasily Kandinsky: Around the Circle is a series of solo exhibitions on the lower ramps of the Guggenheim rotunda that features the work of contemporary artists Etel Adnan, Jennie C. Jones, and Cecilia Vicuña.